A Story from Haiti 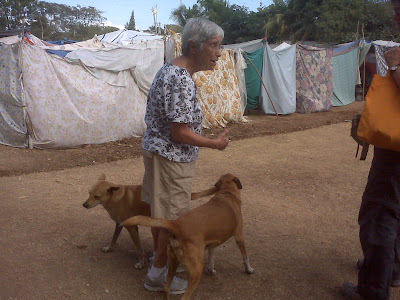 Matthew 25:
“I tell you the truth, whatever you did for one of the least of these brothers of mine, you did for me.'

We knew we had finally arrived at our destination –Matthew 25- when we saw a middle-aged white man sitting in a chair in the front courtyard having a haircut. By now, scenes of everyday life didn’t shock the way they did at first-- it had been a full three weeks since the “event”, the January 12 earthquake. But still, the sight of a white “gentil-homme”, as they are known in Creole, meant we had arrived at a foreign establishment, probably an NGO. He turned out to be Patrick, one of the founders and managers of Matthew 25.

Matthew 25 was our destination because my friends Cathy and John knew about the medical clinic through a close friend. They had been carrying special supplies, including strong pain medications, for the past ten days and were determined to deliver them to the right place and not to have them absorbed into the chaotic and anonymous stream of foreign donations we had already witnessed. We had labored to follow the sketchy directions and had forded narrow dirt paths through the shantytown, past makeshift refugee camps pleading for help, past blackened black women selling coal on the sides of the road, past hairdressers open for business, past the demolished Haitian art gallery, past countless homes transformed into rubble piles, and past inscrutable stares as our white Fiat made its way through the alleys.

A laconic guard let us through the gate and we were ushered around the temporary barber chair, past scores of donation boxes and into a welcoming, bustling, warm, crowded and, as we were to discover later, a newly one-story building where all manner of people were on laptops, eating lunch, getting water, and moving through the doors to the back yard.

Out back and around the cinder-block kitchen was a shady area filled with high quality multi-colored tents, the kind my kids have in storage in the attic. And adjacent to this yard, just over a fence and through a hedge is the soccer field which was transformed overnight on January 12 into a refugee camp for the neighborhood. Tidy rows of cubicles created by four sheets filled most of the soccer field but at one end was a series of tents, one from Vermont advertising Burton skiwear for women, where medical personnel were examining and treating the sheet-camp residents and others who might wander in from the neighborhood. Behind this clinic big Haitian boys played basketball on a beautiful court while young girls jumped double dutch on the sidelines.
Among first impressions were the sensational smells of something like Bolognese sauce, the tidy barrels of purified water from HydrAid International, and the shelves and shelves in the living room that had become a pharmacy to service the clinic outside.

Sister Mary soon appeared and I immediately took a liking to her as she reminded me of my grandmother Ann. A sturdy, determined, kind but severe woman with short white hair dressed in sneakers and anklets with strong no-nonsense legs was wearing a short floral house dress. As she met each of us she was as present as could be and asked each of us where we were from, and was pleased to hear I am from Westchester County, New York where she has just forged an affiliation with the main county hospital.
As we commented on the apparent efficiency and quiet of the camp she told us that 1500 people live there, and as many as 500 leave and return nightly after work. Soon she was sharing the story of the night of the earthquake and showing us the dining room table, now covered in papers and laptops and supplies, where she witnessed emergency surgical procedures, including amputations. She described cutting up sheets for dressings and how the neighborhood descended on the soccer field knowing that someone would respond to them.

The neighbors knew help would be forthcoming because Matthew 25 served as the hospitality house for the Twin Parish Program, a pairing of US Catholic parishes with village parishes throughout Haiti. When teams arrive in PAP they are welcome to use Matthew 25 as their base. Later I would meet physicians from New Jersey who have been serving through this program in Haiti for years.

The tired staff seemed happy to see us and in spite of identifying ourselves as mere visitors, we were begged to see some patients. Before long all four of us had set to work. A line of mothers and children soon formed under the tent. The complaints were similar to what I had been seeing—dizziness, cough, fever at night, and skin rashes, but there clearly was an intestinal infection in the camp causing diarrhea and dehydration in the youngest children. In the developing world and under these conditions, this is a major cause of death so the simplest solutions were necessary. A seasoned nurse quickly taught me the recipe for rice water: cook the rice in twice the usual amount of salted water until very mushy, remove the rice and give the liquid to the infant with a bit of sugar added. All of these ingredients, including the wood fire were available in the camp and so off they went with a prescription to return in a few hours if there was no urine output.

I soon became friends with the “pharmacist” who turned out to be a delightful man from the neighborhood who had been working for a pharmaceutical company and since he knew some drugs by name was perfect for the dispensary job. He gave out what they had and had become clever with substitutions and suggestions when my recommendations were impossible. Later he told me about the night of the twelfth and for the first time I heard words like “chaos” and “enfer” (hell) used to describe the sounds, sights, and sensations of that first night of terror. And for the first time I heard the despair about the future of Haiti as he tried to explain that people like him have no time for politics or activism, that life itself takes all day just to make ends meet.
Sister Mary describes best what that night was like in this January letter on the Matthew 25 website written just after the earthquake when she was still not sure how any help would reach Port au Prince:

Sr Mary, Vivian and our 6 guests performed superbly in treating many injured. Eventually, 3 Haitian doctors showed up, I think when they heard we had supplies. Worked til about one in the morning. We were also one of the few houses to have power with our inverters and batteries, so we set up 3 or 4 lights on the soccer field to help with the treatment. The hospitals are either badly damaged or destroyed and have stopped taking patients as they are overwhelmed. Pray for our sisters and brothers.

Matthew 25 is a place I would love to return to when I go back to Haiti. Their long track record in Haiti, their outreach into the rural areas (more important than ever now that people have been forced to migrate away from the city), and the extraordinary kindness and gentleness, along with acceptance of Haitian culture both in fact and in their mission statements, make it a place I would love to contribute to in the future. I think of them often and want to bring my friends and family to them, to teach art, to play games, to teach English, to do cognitive behavioral therapy for their PTSD, and to get to know them better.
Please continue to keep Haiti on your "radar screen." There are many, many ways to help, even at a distance.
Posted by Ann Engelland, M.D. at 3:38 PM No comments: 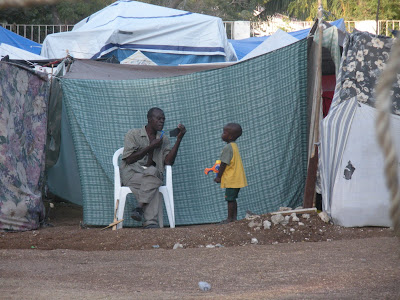 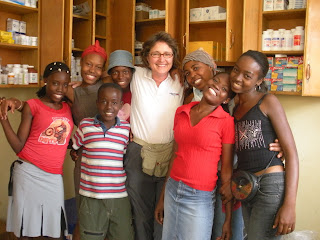 They warned us that it would be strange to return. The guy at the camera store wondered if my pictures of Haiti were obtained when my cruise ship stopped there. People prepare for the festive long weekend ahead: some off to Florida to play golf, others to celebrate carnival in Trinidad. Teenagers struggle with their acne breakouts. And thousands are without power in the cold and buried in snow.
I am reminded of my first glimpse of Port au Prince as we arrived at the end of the day to see well dressed people emerging from offices, students in uniform in the streets, and vendors selling fresh fruit on the sidewalks. Where, I wondered, is the catastrophe? I soon discovered that many of these apparently unaffected people were sleeping on sheets in courtyards and parks, but putting themselves together and going to work anyway.
And so life goes on.
In addition to sleeping and napping and managing my photos, I have been trying to email and fulfill promises made to Haitians to get them supplies, to connect students with opportunities abroad, and to thank the countless people who made my ten days there so special. Back at home, I want to thank the following for helping to get my trip off the ground:
The stories are circulating in my head. They will emerge on paper soon. Stay tuned. Meanwhile,
senses for the day:

treating people aa fast as we can

My fourth day in PAP and exhausted but exhilarated by the huge need and ability to resPond. (Writing on BB: very hard for me but no computer here)

First two days we set up a new clinic in PAP that will be a permanent fixture in the community run by the parish. Deeply spiritual people--oh my goodness. Also astoundingly well dressed and groomed by any standard but considering they are sleeping on sheets on bare ground, cooking over awful polluting fires and the dust in the air is thick, it is near short of miraculous.

Sight:the tap tap that had "incroyable mais vrai"painted on the side. Tap taps are the famous hand painted Haitian buses

Sound:the congregation in prayer at theopening of the clinic yesterday. We saw 120 pts on. First day. So much PTSD. Taught the med student working with me how to teach deep breathing and anti stress technique. What else to do? They pray.

Taste: fresh papaya every day. Yes we have plenty of food

Smell: the perfume on my immaculately groomed (white pressed skirt)translator who is a fourth year med student here now without a school. More about that later!

Touch: the disgusting feeling of 50 plus layers of Purell.

Trying to fly out today, perhaps on military craft, maybe charter. Huge new group from US arrived last night. Ready to come home. But planning to come backto Haiti with friends. So much work to do and gentle people to meet and know.
Posted by Ann Engelland, M.D. at 11:58 AM No comments:

This is Robin. I have had brief contact with Ann. She has asked me to update everyone on her trip.
Hunger remains a major problem............needless to say.
She is doing well and working hard..........no surprise there!
For everyone that knows Ann, she is experiencing great satisfaction doing what she does best-helping people.