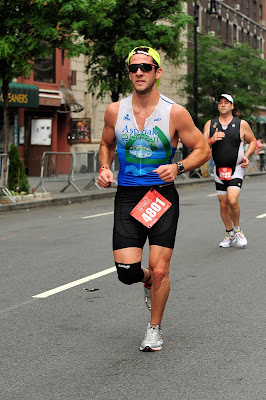 These days you hear bits of advice everywhere about staying hydrated and exercising in this hot and humid environment. So here is a bit of advice I solicited from my son, Justin Merolla, who completed the New York City Triathlon yesterday.

For those who don't know, a triathlon means the athletes complete a 1,500-meter swim(in the Hudson River), a 40-kilometer bicycle ride and a 10-kilometer run, ending in Central Park, all executed as quickly as possible, moving from one event to the next in a seamless, organized way.

The photo at the left is Justin running in the New York City triathlon exactly one year ago when it was 97 degrees at 11 am! Yesterday was barely different. So from someone who knows and has trained extensively and intensively are some words of advice on hydration. This advice holds especially for endurance athletes but any tennis, football, soccer or field hockey player who is training now (or later in August when this weather is even more common) should listen up:


Any coach, trainer, player or parent who thinks it's ok to overdress (eg in football gear) and decrease the ability to cool by sweating should be advised of his or her error. When sweating profusely an electrolyte drink such as Gatorade is the way to go.

The human body can adapt to incredibly harsh conditions. But there is no substitute for training, nutrition, focus and willpower. And then those shoes from JackRabbit in New York!