The War and Us 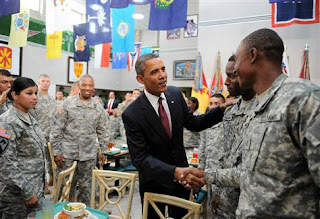 Because my son, Nick, is in The Basic School of the USMarines in Quantico Virginia, I have found myself reading books about the war that I would not even have stopped to look at until recently.

First, I read War by Sebastian Junger who is the wonderful writer many of us admire from his book The Perfect Storm.  In War,  Junger chronicles a storm of a different sort as he shows us what it is like to be stationed for months at a forlorn outpost in Afghanistan with a small platoon of  bored, lonely and confused soldiers.  This is a story of the agony of waiting, of sitting out their tour of duty in a devastated and uncertain area.

The next book I read is The Good Soldiers by David Finkel that recounts his eight months in Iraq while embedded with soldiers during the surge.  A reviewer on Amazon.com summed it up this way, better than I ever could:

It's not easy to read. It's not fun. It always seems like the audience wants these types of books to be either blatantly anti-any-war polemics, or rah-rah, wave-the-flag screeds. Iraq was neither of those places. It wasn't anything other than the worst place on earth, with a lot of bad things happening, and everybody telling a lot of funny stories while they were hoping to get home okay. Nobody really remembers or considers the soldiers who had to go out there, into that fight. They think they do, but they don't. This book will help you understand; oh, will it ever.


I can only tell you that my personal reaction to these Up-Close-And-Personal accounts went deeper than just the read.  Yesterday when I boarded a plane to fly home after vacation, I saw a very young soldier in army camouflage seated in the bulkhead seat in first class.  Some spirit possessed me to lean over to him as I passed and say "thank you for whatever you do." As he smiled at me and thanked me in return,  I recognized some person in myself that I was not familiar with until this summer.  That's a person who used to think there was some pathological weakness about a US soldier, especially someone who would have been to Vietnam.  As the soldiers in these two books show, these warriors are our very own boys and girls-- brave, adventurous, fit, idealistic, damaged, funny, talented, and scared.

I wish I could believe that the current drawdown and return of our troops meant the end of something.  I fear it will be just a new phase, maybe even more removed from our daily lives, even more inaccessible to our understanding.  Bravo to Junger and Finkel for exposing the harrowing, disconcerting and unsettling inner workings of this war in writing that is gripping and has the ability to change us.
Posted by Ann Engelland, M.D. at 6:23 PM