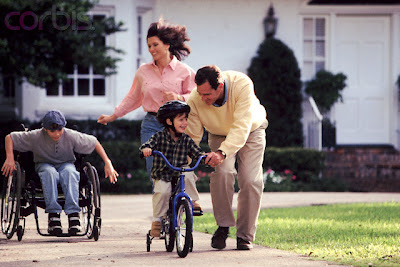 Again, siblings of kids with unusual needs are in the news.  Today NPR broadcast "Siblings of Sick Kids Learn a Life Lesson Early" which you can listen to here.   This brief report is about the issues that face families where there is a child with a difference.   These differences include chronic disease, mental illness, and developmental disabilities.

When young, siblings may feel "caught outside the bubble of the family world" where the medical and social concerns and crises of a sib might "trump regular kid concerns" like birthday parties and sleepovers.  Although one might expect kids to sometimes feel neglected or jealous, in the long run research shows that they show a strong capacity for empathy well beyond their years.  And this empathy ultimately informs many of their life decisions.

The broadcast showcases a support group at Vanderbilt University that allows teens to come together to share their experiences, concerns and worries with other families and peers.  The findings may come as a relief to parents who feel they may have "almost missed (the healthy child's) life," as one mother admits.  Those of us in the professions that know and care about such families need to advocate for more attention to the concerns and support for the special qualities of the siblings.  Often the next generation of caregivers and professionals come from their ranks.

image via Google from Corbisimages.com
Posted by Ann Engelland, M.D. at 2:03 PM 1 comment:

To Eat or Not to Eat:living with anorexia nervosa 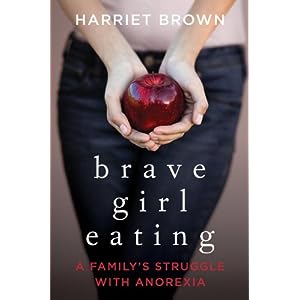 As a physician who frequently sees patients with eating disorders, I am always looking for a better book to help parents learn about ED and pilot them through very destabilizing times.  Harriet Brown, a journalism professor, writer, blogger and mother, has written a very personal story.   Brave Girl Eating:a family's struggle with anorexia, follows Brown and her family as they learn about and manage her daughter, Kitty's, anorexia.   Specifically, Brown chronicles her research and the practice of appyling family based treatment (FBT) also known as  the Maudsley approach, to managing anorexia.   Although this method requires a great deal of commitment and patience and some seriously impressive parenting skills, it is the only method which really has shown to be successful in treating this terrible disease.

Brown reminds us that anorexia nervosa is a biologically based illness, not simply  a willful, bratty misguided attempt to be thin or a failure of otherwise good parents.  She deftly describes the theories of this "encapsulated psychosis" and better than in most accounts manages to explain how disordered thinking about food is a result of starvation.  As they evolved, prehistoric people who were starving became single minded and frenetic--one might say obsessed-- in their search for food.  This phenomenon is often seen in patients with anorexia nervosa who seem to have extraordinary energy and drive for exercise and scholastic pursuits in spite of an  obviously wasted body.

Perhaps Brown's greatest contribution is her description of the stress and strain on her husband, their marriage and Kitty's younger sister Emma as the disease takes hold within the family.   Besides the fact that ED runs in families and one has to worry about the impact of living up close and personal to someone who is so "successful" at dieting is the fact that the illness drains energy, time and compassion from the engaged parents.  Of course, the "unaffected" siblings are deeply affected by the stress, tension and outright fighting that inevitably goes on in a home rent by anorexia.

More than one parent has come to my office holding onto this book as if it were the guidebook. And in many ways it is.  But it is not a hands-on manual and not a substitute for the team of people-doctor, therapist, dietician- who need to be marshalled to care for these patients and families.  However, it will help parents seek out and ask questions of  providers to ensure buying into a treatment that has a better chance of success than a punitive, psychodynamic approach.   Food is the remedy and "if you do intensive psychotherapy with someone with anorexia, you wind up with an insightful corpse, because without enough glucose the brain can't process or think properly."
Posted by Ann Engelland, M.D. at 4:10 PM 1 comment:

TEDx for high school students near you

Parents worry about what their kids are doing online or in their free time.  We hear a lot about the concerns over the internet, social media and the access to strangers online.  But, we are just beginning to figure out some of the extraordinary opportunities for growth that all of these new tools can offer.

Now if you've never heard of TED conferences, it's time to learn.  TED stands for technology, entertainment and design, and even the AARP website encourages participation. It's for everyone.  TED's slogan is "ideas worth sharing" and their website, TED.com, is loaded with over 700 ingenious performances, talks,pitches, patents, and ideas that range all over the encyclopedia of human experience across the globe.

Today I had the singular pleasure of seeing my daughters, Alice and Daphne Taranto, and their friend and creative partner, Zoe Kestan, present their magazine/website/blog/twitter page/facebook phenomenon called FAD at a TED conference sponsored by their school, Horace Mann in Riverdale, NY.  FAD magazine stands for FashionArtDesign and is an entirely student run enterprise.  They were joined by other hard-working passionate kids who are making extraordinary contributions to culture and making the world a better, richer place.

This TED conference, called TEDx because it is entirely locally run and organized, had five New York City schools participating.  The format included the celebrated TED style of short talks, performances and demonstrations, two TEDTalks videos (including  JK Rawling from her 2008 Harvard commencement address--perfect on the day after the release of the latest Harry Potter movie); and bias free programming--a stipulation for licensure and use of the TED name.

Other impressive presentations included a student's performance of classical Indian dance followed by an extraordinary video of wheelchair "bound" dancers performing in India where she worked last summer. Four young men presented their latest apps for smartphones of which they have sold over 100, 000 to Apple's App Store online.  Another student presented his Zawadi by Youth, a student-run microfinance program which is funding small-scale entrepreneurs in the developing world and teaching NYC students about small business in emerging countries. Closer to home, Chelsea Dale, from Fieldston School, presented her program, On Giants' Shoulders, a mentoring program for privileged high school seniors who mentor weekly through Skype contact with younger students in the East Bronx.

All in all these students were an inspiring mix of passion, hard work, creativity, ingenuity, and risk-taking.  Their ability to fearlessly embrace the world at large by wedding technology to compassion is impressive.  Let's hope that more schools and teachers like Dr Jeff Weitz at Horace Mann will organize and sponsor these programs and motivate high school students to pursue their passions and learn the value of sharing great ideas and the arduous but rewarding process of going from idea to product. 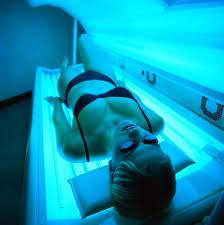 As the days grow longer and colder, many begin to dream of a warm summer day or a Caribbean island inhabited by descendants of pirates or Johnny Depp.  And others simply head down the street to the closest tanning center.   If you or someone you care about is doing this on a regular basis, you might want to think about why.

In a 2010 collaborative study from SUNY Albany and Memorial Sloan-Kettering Cancer Center, the researchers report the tanning habits and psychological profiles of over 400 students.  What they found is notable.  Nearly 40% of the 237 students who used indoor tanning met criteria for addiction to the behavior.

Students in this subgroup also reported more use of controlled substances (excluding alcohol).  In addition, students who met the criteria for addiction to indoor tanning were twice as likely to have symptoms of anxiety or depression than non-addicted students.  This study suggests that students who may have a predilection for addictive behaviors of all kinds are likely to add tanning to the list.

Given the origin of this study at Sloan Kettering it's not surprising that the authors ironic conclusion is that treating an underlying mood or anxiety disorder "may be a necessary step in reducing skin cancer risk among those who frequently tan indoors."   Will tanning salons soon be required to add some disclaimer about unstable mental health to the consent form people sign acknowledging their right to cancer?
Posted by Ann Engelland, M.D. at 2:09 PM No comments:

More Support for our Athletes' Heads! 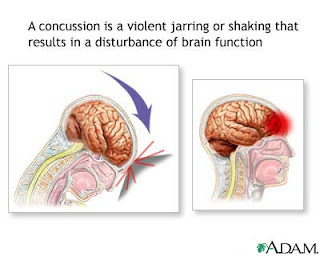 The American Academy of Neurology has released a brief position paper on the importance of immediate recognition and management of concussion in athletes. This is a big boost to those of us who are working against a tradition of toughness on the field and getting back in the game, too often with short and long term disastrous consequences. Here is what they said:

The group recommends that all athletes suspected of having a concussion first be removed from participation and then be evaluated by a physician with experience in concussion management. Before being allowed to participate again, athletes must receive clearance from a physician or neurologist. Athletes should not compete if they are still having symptoms of a concussion.

This approach is in keeping with the policy we have implemented in the Mamaroneck School District. Even two years later, we are still working to make this acceptable and accepted by athletes, coaches, parents and physicians in the community. The support of organizations like the AAN along with the NFL will go a long way toward creating acceptance of this conservative and careful approach.

image credit: Google Images
Posted by Ann Engelland, M.D. at 7:42 AM No comments:

Screening for Depression in Teens

A study released in the online version of Pediatrics today gives clinicians a readily available tool to screen for depression in adolescents.  (At the time of this posting it is not yet available online).
Called the Patient Health Questionnaire-9, or PHQ-9 referring to the nine questions it poses, this tool has been used to screen for depression in adults for some time.  Now researchers under the guidance of Dr Laura Richardson at the University of Washington in Seattle have shown its effectiveness in a survey of over 400 teens ages 13-17.

The Questionnaire can be viewed here.  Essentially it asks about feelings of sadness, hopelessness, and about appetite, sleep difficulties, and thoughts of hurting oneself.  A score of over 11 on the test is highly sensitive for picking up teens with depression.

This is a convenient and useful tool for busy doctors and clinicians to use as a screening device.  It should never take the place of a confidential and private conversation to clarify the meaning of the answers, to assess the dangers and to provide support and referral where necessary.