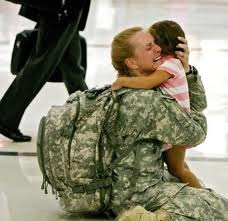 "When a parent in the military is deployed, children have an 11% increased risk for requiring mental and behavioral health doctor visits, compared with when the parent is home. This information is the conclusion of a large chart review-type study published in Pediatrics in December, 2010. Frankly I found the number relatively low compared to what I had imagined. Some interesting findings of the study were:
The report in the pediatric literature bears spreading to others who care about and know children. Teachers, family, clergy and friends need to be aware that "the psychosocial burden of war extends beyond the military service members' combat time...perhaps unfolding years after combat exposure," according to Dr Beth Ellen Davis, a retired colonel in the US Army. Resources cited in the 2010 Pediatric News where this study was reviewed include The American Academy of Pediatrics Military Deployment support web site: www.aap.org/sections/unifserv/deployment This features videos and an interactive "youth stress management plan". Other resources include Military One Source and Military Home Front.

A simple acknowledgment of the parents' deployment and a simple "How are you doing with that?" can be an important outreach question. And let's not forget the siblings, cousins, and neighbors who may also be deployed and weighing on young hearts and minds.

I welcome feedback and sharing of experiences from readers who have experienced deployment themselves or have waited at home for a loved one.
image from my-fathersvoice.blogspot.com
Posted by Ann Engelland, M.D. at 3:32 PM