"Does Football Have a Future?" 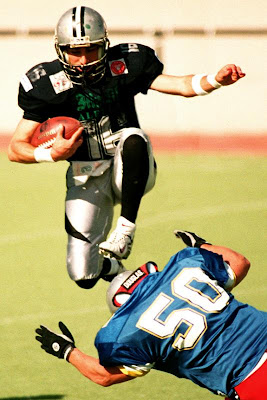 I didn't ask that question. I continue to beat my drum about concussions,  and the sound of the many drumbeats out there is getting louder and harder to ignore. The question is the title of a fascinating, in-depth article in this week's New Yorker by Ben McGrath about America's gladiator sport and the latest on the resulting brain damage.

McGrath intrepidly raises the thorny issues of the socioeconomic aspects of this sport. He says:


"The people most inclined to ask the question 'Would you let your kid play football?' did not play football themselves growing up, because their parents were put off by the sport's brutish culture, regardless of any understanding of brain science....How many of the men on the field in the Super Bowl will be playing with incipient dementia?"

McGrath quotes extensively from and praises the work of Alan Schwarz of the New York Times. A comprehensive list of his recent research and articles can be viewed here.  Among other aspects of Schwarz' work, we learn about the likely link between teenage and high school football and later brain damage.

The many coaches, students, athletes, and parents who have wondered over the past few years about the new concussion guidelines and policies that I have helped implement in the Mamaroneck schools all need to read this article. As a teenager noted to me recently--as only a 21st century teen could--The New Yorker articles are very lengthy, but I assure you that if you have anything to do with football it is an engrossing and worthwhile read.

In the mean time, while our schools develop and refine their thinking and policies about concussion management, I encourage all athletes to invest the small fee required for a baseline Impact test (described here) and to be tested if there is any concern that a head injury or significant blow might be strong enough to warrant the new, conservative approach. As a Credentialed ImPACT Consultant, I am one of three providers in Westchester who can test, interpret, educate and counsel athletes and parents on this important issue.
Posted by Ann Engelland, M.D. at 11:33 AM