I am not often accused of hovering over my children. In fact, I generally feel we have done a decent job of raising resilient, independent young adults.

But with my last two headed off to college these past few weeks, I have been hovering more than usual.  I have to stop myself from asking what time they will be home or where they are going or asking them to check in too often.   And once I dropped the first daughter off at school I was fine  with getting pushed out at 6pm after a rushed, but nonetheless teary, goodbye. Fine, that is, for about twenty miles when the flood gates opened up.

So it was particularly amusing for me to see this photo : 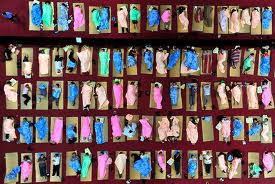 "Parents of newly arrived freshmen students sleep on the floor of the Youming Gymnasium at the Central China Normal University on September 3, 2011 in Wuhan, Hubei Province of China. The university opens its gymnasium for the parents who sent their newly enrolled students to the college in the new term. (Photo by Zhou Liangjiu/ChinaFotoPress)


The university set out mats for some 600 parents accompanying freshmen students on their first day of school, local media reported."  If you look carefully there are actually two adults on some mats.

Maybe this should serve as a reminder of how we eventually take our children's places and they ours: 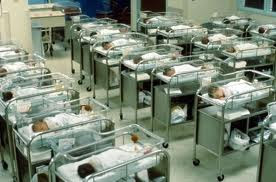 image from today.msnbc.msn.com and via Googleimages
Posted by Ann Engelland, M.D. at 5:46 PM