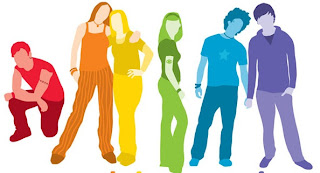 Let's say that another way: if your child (or one you know or care about) identifies as gay or is attracted to someone of the same sex, he or she is at much higher risk of depression and suicidal thoughts. It turns out that youth who identify as bisexual are at even higher risk.  Other behaviors and risks that run in LGBTQ youth (otherwise known as sexual minority youth or SMY) are: substance use, eating disorders, victimization (bullying) and interpersonal violence.

Although clinicians and folks who care for young people have known for some time that the suicide rates among LGBTQ youth are high, this recent study published in theAugust Journal of Adolescent Health  looked at 24 previously published studies of depression and suicide in young people to tease out some of this data.  They remind us that even in an age when LGBTQ/SMYouth are coming out at younger ages, the risks of doing so remain high.  If victimization gives rise to a feeling of hopelessness and if a child's environment is not a validating one, all sorts of behaviors from cutting to substance use and antisocial activities and school failure can be the result.

It doesn't have to be this way.

All youth should be screened at their "physicals" for their "mental" health as well.  That should include interviewing them about their sexuality.  For LGBTQ youth further queries about harassment, discrimination or lack of validation should be made and providers should be prepared to "provide appropriate care for  youth in need."

image from dosomething.org via google.com/images
Posted by Ann Engelland, M.D. at 3:01 PM