Tell the Grandparents You Know About Pertussis 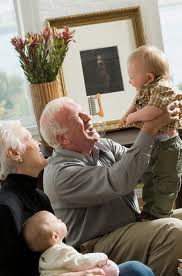 Here's a heads-up about a subject that pediatricians are more aware of than many internists and other clinicians who care for older kids and adults.   Pertussis, or whooping cough, caused by the bacterium Bordetella pertussis, remains a serious cause of illness and even a threat to life to young infants.  Although most people have had immunizations against pertussis during childhood, their immunity or ability to fight the infection can wane with age.

It is now recommended that a single dose of Adacel, the vaccine against tetanus which is combined with pertussis (it works better this way) be given to "all adults 65 years of age and older who have or are likely to have contact with an infant aged younger than 12 months." according to the November 2011 Infectious Diseases in Children newsletter.  This includes pediatricians who refuse to retire, grandparents who have contact with their childrens' children, and day care workers who may unwittingly expose babies to whooping cough.

In older children and adults, pertussis is usually an annoying and sometimes prolonged illness. But in very young children it can cause pneumonia and even sudden death. If you would like to actually hear the sound of the whoop click here. Here is a quote from my own mother's memoir about having whooping cough during a tornado in South Dakota:


In 1929 when I was one year old, I had whooping cough, and a tornado came to our farm.  Since I was very sick (they said I would whoop so much, Pop would hold me upside down to hopefully catch my breath), my folks did not want to take me out into the stormy weather in order to get to "the cave" for shelter.The cave was a storm cellar underground about 50 feet away from the house..... we would seek safety there, even in the middle of the night, when "the weather looked bad".  And so, the family descended to the "cellar" under the house itself. I remember none of this, of course, but heard, stories of "The Storm" as I was growing up and we played "house" with the broken dishes and pots and pans in (my grandmother's) grove of trees across the road. These fragments blew out of our house and ended in those trees.
And I feel respect and wonder at how my parents survived after sitting down there in the cellar, hearing the banging of boards and crashing of glass, (and holding a sick baby).

Dramatic, right?  Any respiratory distress, even in an adult, can be frightening.  Fortunately this degree of disease is preventable.  So, if you have friends, relatives, housekeepers, or caregivers who may be in contact with infants who are not yet fully protected through immunizations until about a year of age, encourage them to get the Adacel vaccine to protect themselves (from tetanus and pertussis) but mostly to protect the young ones in their midst.
Posted by Ann Engelland, M.D. at 2:34 PM