What does hockey say about us? 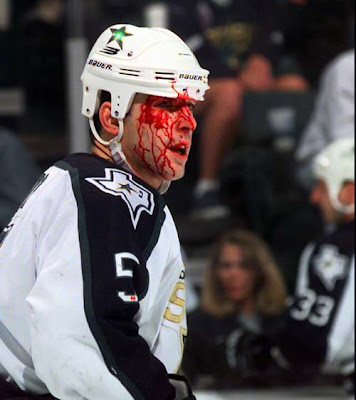 I was thoroughly mesmerized last week by the three part series in the New York Times by John Branch about the life and death of Derek Boogaard entitled "Punched Out: The Life and Death of a Hockey Enforcer."
First of all, the writing itself brought me to tears as I learned about Boogard's early years and the dedication of his parents that now seems almost pathological.  I imagined them driving him in the dead of night across hundreds of miles of Canadian tundra to participate in the national sport that they thought might rescue him from his gargantuan body and his young mind that could not succeed in a classroom as well as it did on the ice.

Then I was stunned by the ferocity and the ghastly descriptions of the brawls and the gladiator-like job of the enforcer, a player whose function is to literally take the gloves off and fight to frighten and intimidate the opponents.  Whereas there might be a graceful quality to hockey (one of my sons played high school varsity hockey and I can still hear the scrape and swish of the steel on the ice, but I can also remember the police presence at the games with particular opponents, "just in case.") and the elegance of a well played goal is undeniable, the presence and encouragement of the enforcer turns the game into a spectacle and a brutish game where violence an mayhem are encouraged.

Finally, in the third article in the series I was saddened by the photos of his parents who perhaps thought they were doing the right thing; of his brother who protected and enabled his drug dependency for years; and by the shocking revelations that many of the players who sustain his degree of battering during their short lives are suffering from degenerative brain disease much like the football players we followed in the Fall.   So now it's winter and once again we are asked to ponder the morality, yes the morality of this sport that intentionally inflicts damage on young bodies and brains for the sheer enterntainment of it.

Over the past few years as I have had the privilege of seeing athletes with head injuries and have been able to folllow them with sequential visits and Impact tests I have learned that many of these athletes are not playing for the joy of the sport.  Very often they are playing to satisfy a parental or family expectation or as a way of compensating for some perceived weakness in some other sphere of their young lives.   When they are finally pulled from the rink or the field because of injury many of them will confess to some relief at the drop in the pressure and the loss of fear of injury they experience.  As one reader wrote in the Times: "This series should be required reading for parents, coaches and children wherever hockey fever reigns."

For a previous blog post on a youth hockey team in Minnesota that is successfully encouraging more elegant and less dangerous play see this post called "Why I love Minnesota."

image from dialecticmagazine.com
Posted by Ann Engelland, M.D. at 5:24 PM