The doctor as patient 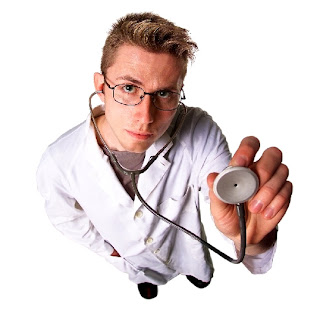 I was recently hospitalized unexpectedly for a few days after orthopedic surgery and realized that being a patient ought to be part of every doctor’s continuing medical education.

Watching from the other side of the curtain—quite literally—allowed me to reflect on ways to be a better doctor.

During my stay my roommate (on the other side of the curtain) was an elderly Haitian woman who only spoke her native Creole.  Being a friend of Haiti, I tried to strike up conversation in French with her, but to no avail.  She really only understood and spoke Creole.

So it was stunning to hear a doctor come to visit her on her first night there after a late arrival.  Here is what I overheard:
Doc:  How are you?
Patient: Oui, oui
Doctor: So Tomorrow Brain MRI.
Patient: oui, oui
Doctor: OK, manana.

Thereafter when personnel would come to speak to her I listened and would offer the information that she did not speak English.  The more compassionate ones would bring in a special phone that allowed a three way conversation with a Creole translator.  Doctors in this situation did not seem to be the compassionate ones.  Were they too busy with more important or urgent things to do or just making assumptions about the patient without requiring her input ?

Then there are the sheer discomforts and indignities of being a patient.  I kept my own pyjamas so as not to walk the halls in a tattered, faded, over-laundered and totally unstylish cotton gown.  And the difficulty of sleeping in a place where the lights are on and personnel walk in and out adds up to a  hard night followed by a disappointing morning ushered in by undrinkable coffee.  These small things don’t really seem they should matter when we are studying the protocols for cardiac arrest or the differential diagnosis of fever, but on a day to day level--the only one a lot of patients really know and relate to--these little things are everything.  They may be what separates the patient from her wellness.

I only wish I had the nerve to ask to be admitted as a true decoy and see how it would go and what I could teach medical students who are young and eager to get it right.  Something to think about.

Email ThisBlogThis!Share to TwitterShare to FacebookShare to Pinterest
Labels: being a patient, Haiti, hospitals, medical education