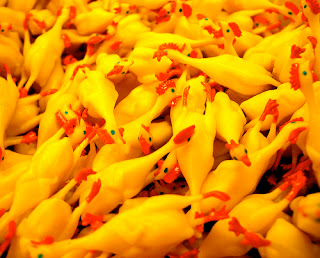 I am a big fan of Mark Bittman's.  His fabulous "How to Cook Everything..." cookbooks are staples of my pantry as well as frequent gifts for friends and family.  In recent times I have turned to him as I have found a proliferation of brussels sprouts,  kale, or garlic in my own garden.  His creative and delicious twists on vegetables have spurred me on to experiment beyond steaming and grilling.

As Bittman has moved from cook to commentator on food, foodism, food fads, health and food politics, I have continued to follow him as he feeds another kind of curiosity and need, although I miss his clever recipes.

So I was happy that my culinary hero merited the front page of the Sunday New York Times yesterday with his article "Finally, Fake Chicken Worth Eating".  And although I am not (yet) a fan of fake meat in almost any form, I read on.

If nothing else captures one's attention it's this appeal:


Really: Would I rather eat cruelly raised, polluting, unhealthful chicken, or a plant product that’s nutritionally similar or superior, good enough to fool me and requires no antibiotics, cutting off of heads or other nasty things? Isn’t it preferable, at least some of the time, to eat plant products mixed with water that have been put through a thingamajiggy that spews out meatlike stuff, instead of eating those same plant products put into a chicken that does its biomechanical thing for the six weeks of its miserable existence, only to have its throat cut in the service of yielding barely distinguishable meat?

If Bittman is willing to give this stuff a chance then so am I.


image from grist.org via Googleimages
Posted by Ann Engelland, M.D. at 8:08 AM