Do You Hold the Heads of our Youth on Yours? 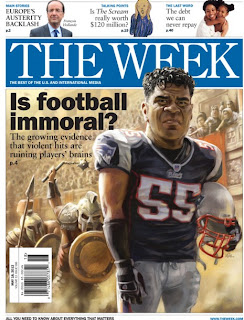 My inbox was crowded with more compelling stories of concussions in sports.  On the one hand Junior Seau's dramatic suicide (the 44 year old NFL legend shot himself in the chest, some say thus preserving his brain for pathologic examination for evidence of CTE, chronic traumatic encephalopathy) inspired analogies of the sport of football with bullfighting and gladiators. The cover story of The Week (above) posed the obvious question.

On the other hand, Kate Snow and Brian Williams produced an almost unbelievable report about a suburban soccer team where a majority of the girls are allowed to play almost daily with headaches and injuries and handicaps that most certainly will affect their lives forever.

We can no longer ignore the scientific and public health data that has been streaming out of academic centers and the media but somehow is falling on resistant and deaf ears when it comes to players, coaches, parents, and even health care providers who certainly should know better by now.     Even when confronted by Kate Snow (who claims to be a soccer mom and sympathetic to the game) some of the parents are reluctant to pull their daughters from the sport.  This in the face of dramatic symptoms that virtually scream concussion and post concussion syndrome.

As a school physician in a relatively tightly knit community we see students who are removed from play due to a reported head injury at school but who are known to be allowed to play over the weekend on their travel teams.  Of course, we beg the deeper questions of excessive involvement in a uni-dimensional activity at this age, but more importantly and germane to this discussion is the issue of the lack of responsibility on the part of everyone from the player on up.

Parents, rec leagues, coaches and volunteers should be held to a much higher standard when it comes to concussion.  I would suggest that at a minimum every coach and parent start by taking the free online course offered by the CDC before they take on the responsibility for  the well-being, physical and mental health of these young athletes.

This is only a place to begin.  Once more people are educated about the risks, a more reasonable conversation can begin about changing sports, rules, practices, regulations and our relationships to them.