"He’s a kid, still, in a lot of ways. He wants to show that he can take a licking and keep on ticking. But that’s a head in his helmet, not a Timex " Tracee Hamilton, Washington Post, October 8, 2012 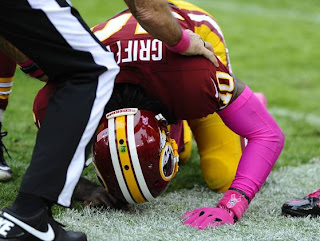 This refers of course to Robert Griffin III just a day after his aggressive play which ended in a concussion and a short rest from game play--a length of time which itself has since stirred controversy.

If this professional quarterback still plays and behaves like a kid, then imagine what goes on in the minds of the middle schoolers with ADHD who are out there playing their hearts out, using their heads in one way or another.

My book, It's All in Your Head: Everyone's Guide to Managing Concussions will introduce players, trainers and providers at all levels to ways in which everyone in the community must begin to take responsibility for those heads. Not every bobble-headed 10 year old has the NFL police watching out for his welfare; this is where parents, friends, coaches, teachers and health care providers may need to step in.

Get it now at www.ManagingConcussions.com

Trickle Down or Touch Down 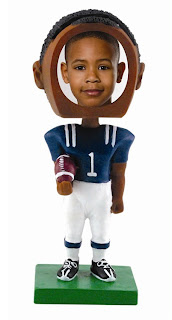 The country is having a conversation about football. As a culture and a nation we are asking questions like where, when and how the game should be played, in addition to whether it should be played at all. It seems the lower age limit on this discussion is trickling downward all the time.

Peewee league players with their helmeted bobbleheads are now on the covers of several books that review the history of head injury and its revelation in the NFL. Likewise, an excellent documentary film, Head Games, chronicles the same history in graphic detail.

Now, serious investigators and clinicians are asking whether the sport should be played by pre-teens at all. Schools, teams, leagues and others are trying to make sense of where football is or should be going.

But the sport isn’t going to slink into the history books so fast. Not as long as programs like Steve Clarkson’s in California continue to exist and thrive. This quarterback training camp, profiled in The New Yorker, shows us the lengths to which families will go to give their kid a “leg up” or a “head start “ on a football career, sometimes enrolling promising peewees as young as 8. Not surprisingly, this article also profiles the parents of these youngsters “who may be inclined to see an overreaction to the concussion controversy that has left youth football in a seemingly precarious position.”

It is troubling to read about such denial in the face of mounting data. It feels reminiscent of the deniers of global warming or the deniers of the effects of second hand smoke. That cultural mores and stubborn traditions may actually stand in the way of childrens’ mental and physical well-being is what is so disturbing. Every parent, coach, teacher, clinician and adult has the ability to prevent injury and long term consequences if they are educated.

And it starts with the players themselves. “This is a very important part of teaching concussion awareness, letting players know it's their responsibility to acknowledge a problem,” writes Tom Goldman in his NPR story. “Historically that hasn't often happened in football, where playing with pain and injury is a sign of toughness, a badge of honor.” What we need to teach everyone is the Four Rs: Learning to Recognize, Respond, Rest, and Reassess after a head injury is everyone’s responsibility, from the injured athlete (of any age) on up.
Posted by Ann Engelland, M.D. at 12:20 PM No comments: