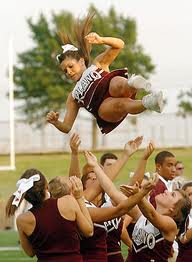 The days of innocent pompoms, splits and clapping are long gone.  And with the increasingly athletic and fast-paced routines and stunts that we see cheerleaders doing from elementary school on through professional sports, it is not surprising that the number and severity of injuries has increased.  In fact between 1980 and 2007, the number of hospital emergency room visits for cheerleading injuries increased by over 400%.

Stunting which involves “maneuvers in which 1 or more bases supports 1 or more flyers off the ground” accounts for nearly 2/3 of all cheerleading injuries and 96% of all concussions.  Although the overall injury rates for girls in cheerleading are lower than many other sports,  almost 70% of “catastrophic” injuries--resulting in permanent brain injury, paralysis, or death--among high school and college female athletes were among cheerleaders.

The Academy issued a twelve point set of recommendations which ranges from instructions on safer surfaces to improved training for coaches and the presence of certified athletic trainers to asking for the NCAA to designate cheerleading a sport. These recommendations and the entire article can be seen here.

image from the sportofcheerleading.blogspot.com via google images
Posted by Ann Engelland, M.D. at 3:31 PM