I have begun to join the interesting community on social networking sites that follows concussions and brain injury. Shortly after launching my twitter account (@concussionguide) I heard from ConcussionMom who is Jamie Stelman Uretsky from Massachusetts. She told me about her daughter, Madeline and wrote this:

“In October, she was the speaker at the 10th annual Brian Injury Association Walk in Boston, and last week, she was a speaker at the Pediatric Brain Injury Conference in Marlborough, MA. She will also be featured in an article for Bay State Parenting Magazine in January. This injury has certainly changed her life, and she intends to have some good come of it for others, so she's become an activist for students with concussions. She truly wants to make a difference.”

Here is Madeline’s story in her own words written for ManagingConcussions.com, the website for my book: 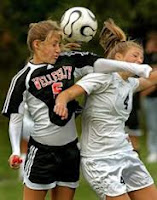 "My name is Madeline Uretsky, and I am a high school student/athlete; I play soccer, ice hockey, and track, am an active member in my school/class, an honor roll student, and a very positive person. In a matter of seconds, all of this changed for me. You never think it’s going to happen to you.

I sustained a mild concussion in May 2011 when I hit my head on a car door. It was my second concussion on October 13, 2011, that has changed my life. While playing in my high school soccer game, I was tripped from behind, fell on my forehead, snapped my neck back, and hit my forehead again. I knew something was wrong immediately, but I had no idea how serious it would be.

I spent the first 3 months of my concussion lying in bed at home, in a dark room, and on complete brain rest. This brain rest meant that I could not watch TV, use a computer, phone, draw, text, read anything, do any sort of homework or exercise. In other words, I could just sleep and lie in bed.

At this time, my symptoms were numerous and very high on the symptoms scale at the doctor. I had excruciating headaches as well as very sharp pains all over my head, severe whiplash, disorientation, memory loss, extreme fatigue, dizziness, balance problems, trouble following a conversation, ringing in my ears, and I could not tolerate any bright colors, light, or noise of any kind. My sleep at night was erratic and filled with nightmares.

For the first 3 months I went to my pediatrician weekly, and my neurosurgeon monthly, for a symptom evaluation. On a scale of 0-6, I had almost all 5’s and 6’s during those three months of brain rest; I could not believe how awful I felt. I started going weekly to a massage therapist who practices a type of acupressure that helps brain injured patients. I liked going because it was a way to relax myself, even though it was painful. I continue to go on an as needed basis, and also do many other kinds of alternative therapies that have been helpful.

As these weeks turned into months, it became apparent that there was no end in sight for me. I was isolated from my friends and my school, yet I felt so awful that I accepted that there was just nothing I could do about it, except rest, and wait it out. I had visitors, on a limited basis, but I did not even feel well enough to enjoy myself. I was unable to engage in any kind of conversation, and I would randomly fall asleep. There were times that I could not even remember that I had visitors.

I missed almost my entire sophomore year and I am still not cleared for physical activity other than walking. I did catch up with my schoolwork and now I am on a full schedule at school but with accommodations such as extended time on tests. I still have many of my symptoms, but they are less severe. Focusing, processing new information, multi tasking, and comprehending orally are some of the issues I currently have. I am doing much better than I was a year ago, but brain injuries are a work in progress.

I have been lucky to have a great support system of family, friends, and my medical team. Brain injuries can be very isolating and lonely, and I want to use my experience to help others, and let them know they are not alone. Things do get better over time."